I spent Sunday afternoon at a friends house teaching her to sew.  She got a sewing machine for Christmas a couple of years ago and has played around with it a little.  She wanted to make curtains for her guest room and she wants to make some throw pillows and whatnot for around the house.  She had tried another teacher that she found online and it didn't work out well.  The person that was teaching her before had never done piping, and seemed a little overwhelmed with the pattern my friend was using.  Finally after a few lessons, they agreed it was best if they both moved on!  So, off I went on Sunday totally looking forward to afternoon with her.  She has three of the most adorable dogs, and they were a huge help.  Here's McTavish being a little pouty because we wouldn't let him sew on the machine (okay, he really just wanted on Susan's lap) 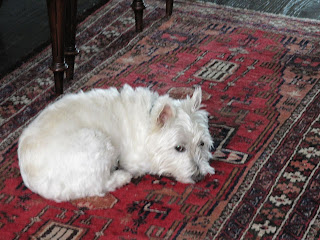 We accomplished quite a bit, and she made me the most WONDERFUL goat cheese quiche with hash brown crust for lunch.  YUM! 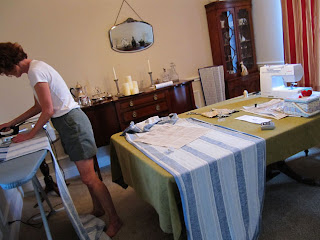 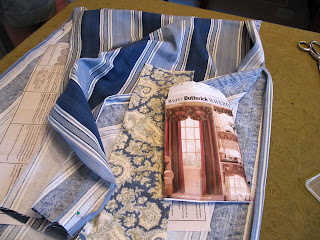 Alfie, well he just slept in the other room  escaping the camera and Muttley got really bored with the whole process. 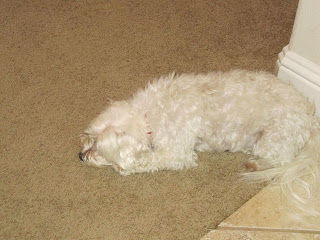 I got an email from her this afternoon that she had finished both panels today and had discovered another oops from the previous teacher.  She had cut out the wrong pattern pieces for the valance so Susan has to head back to the store for more fabric.

It was such a fun afternoon and it was another sign that I am moving in a positive direction towards teaching.  I find it extremely rewarding and exciting.  I am scheduled to teach again at City Craft next Sunday, but we are waiting to see if the class fills.  So far there are two people signed up and that won't be enough to justify the class.  I really hope it fills.  I'm sending positive vibes out and picturing it full.  I really believe in that universal law of attraction.

Speaking of, I started a new eCourse yesterday.  It's called Flying Lessons by Kelly Rae Roberts.  We are two days into the course and I'm pretty impressed so far.  It is a five week course and you can still sign up for it.  It is geared toward starting a creative business and being successful.  Kelly Rae has a very successful art business.  I love her collages and paintings.  A friend of mine had told me about her last year and she also was the one that told me about this eCourse.  I was a little hesitant at first, but I'm really glad I signed up for it.  This year has really been amazing so far.  I started this blog right at the end of 2009 and began to journal about a more creative life.  Many doors have opened up in a short time and most important of all, I have met some really amazing people in the last five months.  People I would not have know about if I hadn't started blogging.  I have learned a ton of new techniques and really spread my creative wings in my quilts since then as well.  I think I have completed more projects in the last five months than I did in the last several years combined!  Time to head off to bed, tomorrow it's back to the ol' nine to five......
Posted by Tapestry Tree at 11:16 PM No comments: Links to this post

I'm feeling very relaxed and happy tonight.  I went to the 1890's House in Cedar Hill this weekend with my fellow officers of the Dallas Modern Quilt Guild.  What an amazing group of women!  We had an absolute blast.  It always amazes me how many wonderful people I have met through quilting.  The type of person that is drawn to quilting seems to have a big heart and a joy for life.  I have found this to be true in almost every quilt guild or group I have belonged to.  And I have been quilting for over 10 years, so I have meant a significant number of quilters over the years.  This particular group of women have become dear friends in an amazingly short amount of time.  We come from all walks of life and range in age from 26 to 51 and we just spent three straight days together talking non-stop, laughing til we cried, eating and sewing. None of us wanted to leave on Sunday.  I got a lot done over the weekend too!  I finished the May block for my virtual quilt bee New Kids on the Block.  And I finished this quilt top.  It was a kit I purchased several years ago and promptly put up on the shelf.  I think it needs a border and then I just need to layer it up and quilt it!  A very productive weekend. 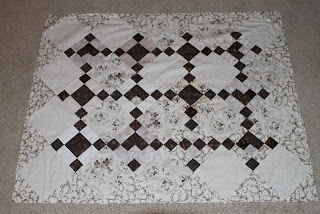 I finished this quilt a couple of weeks ago and it has gone off to it's new home.  The recipient seemed to be very happy with it.  It was a wedding gift for a very dear friend.  I had a lot of fun making this one.  I love how the channel quilting turned out.  I pieced the back with leftovers.  Too fun!  I think it's a very happy quilt, what do you think? 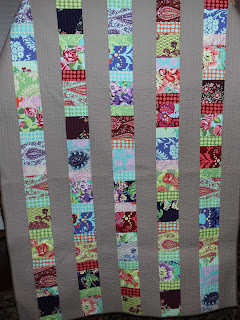 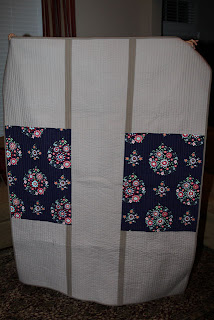 Posted by Tapestry Tree at 10:48 PM 4 comments: Links to this post

Do NOT store your fusible batting in your Texas attic!  I'm just saying......when you pull it out of the attic and try and remove it from the plastic bag it came in.....it's pretty much fused into that sausage roll it came in.   And there will be no unrolling it into a nice flat queen sized batting. ....and you will have to madly rush to the store to buy another one so you can finish the quilt that you want to give to your friend by next Friday.   So, the next time you stock up on batting because the store had them all 20% off....find room under the bed to store it in the nice air conditioned part of your house.....IF you live in a state where your attic becomes hotter than your self cleaning oven.

I know I should have taken photos of the whole comical process....and the mess I ended up with because I was just sure if I was slow and careful I could get the sucker unrolled.  Maybe next time.....oh wait!  There better not BE a next time.

But, I do have pictures of my hexagons.  I started this little project about 4 years ago and then it got placed in a nice little box on a nice little shelf.  I started reading a blog recently Texas Freckles and remembered how very fun they are to do and got them out again.  I have been dragging around a little pencil case with me filled with the papers, fabric, needle and thread and have completed quite a few more. 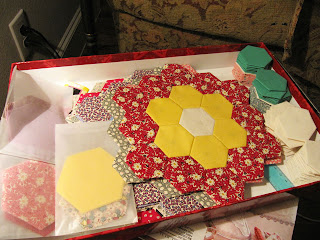 I have had this "thing" for many years for the 30's reproduction fabrics, and saw a kit at a quilt show one day.  It had all of the fabrics already cut into little hexagon shapes and the paper pieces.  So, it quickly became mine!  It is being done in a "flower pattern".  When I was a little girl my grandmother had one in original feedsack fabrics and I loved the pattern even then.  I have always known this pattern as Grandmothers Flower Garden.  I think this quilt has around 1100 pieces in it making up around 80 "flowers"  I have 8 flowers done, but in the last couple of weeks I have completed the hexagons for 2 more flowers and the surrounding cream hexies for several more.  It truly is addicting.  Texas Freckles has some great tutorials on her site and has started a Flickr Group "quilt along".  I've jumped on the bandwagon.  And, this project will qualify for the little challenge my husband issued at the first of the year.   If I can get it done that is.

I finished the quilt I posted about last week(yes, this is the one I had the batting emergency over!)  I'll post pictures of it in the next couple of days.  And....I am signed up to teach another class at City Craft.  I'll be teaching the Quilted Pillow class again and we are working on a "Little Quilt" class that I'll be teaching there very soon.  I'm SO excited!
Posted by Tapestry Tree at 10:34 PM 2 comments: Links to this post

What a weekend!  I found time to start on a new quilt.  It is a surprise for someone I know, so I can't say much about it yet.  I'm using some charm packs of Amy Butler Love, 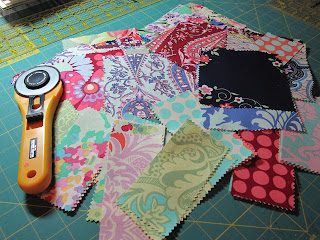 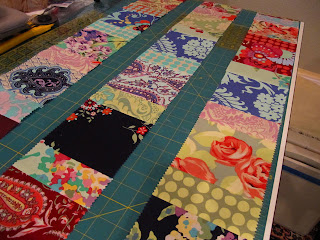 I got the idea from a posting by Oh Fransson on Sew Mama Sew found  here.  Her pattern is a baby quilt and I need a throw size for this gift.  So, I did not have enough charm packs to do it exactly like Elizabeth did, so I am modifying the pattern to make the size I need.  More to follow as it develops.  This is a GREAT pattern to use your charm squares!  It would make a quick, but VERY cute baby quilt.  I have all of the rows stitched for my bigger quilt after just a couple of hours at the machine.  I think it's going to be very cute.

The next very exciting thing about this past weekend was that I taught the second class in my two class series on Beginning Quilting at City Craft.  We had so much fun!  There were six ladies in the class and everyone got their pillows done.  With their permission, I have posted pictures of everyone's pillows.  Isn't it cool how different they all look, even though they all used the same pattern?  Just goes to show, fabric selection is key.  I think they all did an amazing job in picking out their fabrics.  None of these ladies had ever quilted before and a couple of them were very new to sewing.  I'm so impressed with their results. 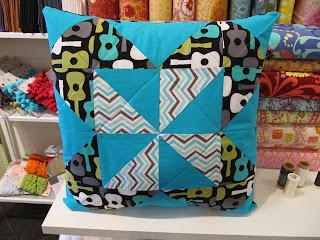 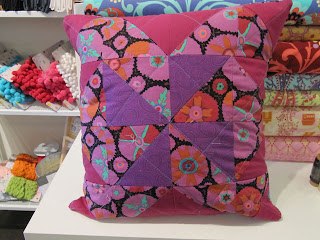 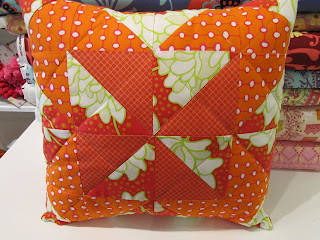 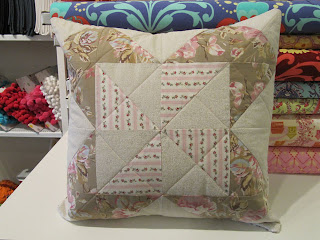 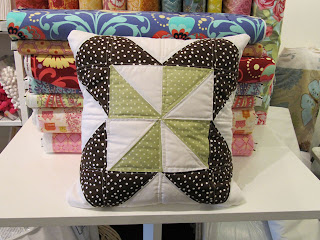 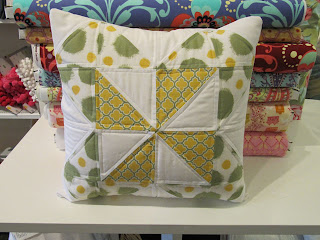 What do you guys think?  Pretty impressive for a first quilt project, huh?  I had so much fun teaching this class.  I would just love to find a way to teach full time.  It made it very hard to return to my office on Monday morning and sit and crunch numbers all day long.  I am a firm believer in the philosophy that if you want something bad enough, you can make it happen.  So, I'm going to busy building a plan to make that very thing happen.  I have the beginnings of an idea bubbling around in my head and I just need to put pen to paper...Don't know when or how, but I think if I throw it out there to the universe and do the legwork, it will return to me in the way it was meant to be.......we'll see.......
Posted by Tapestry Tree at 7:00 PM 4 comments: Links to this post

Tapestry Tree
I have worked with fabric since I was twelve years old, and I love working with my hands to create things. I like my art to be functional. And sometimes I have a hard time deciding which craft to work on. Come join me on my journey of cloth and thread as I weave my way through the fabric of my life.

Get this widget at roytanck.com

I Took the Process Pledge