I'm sitting on a plane on the way back from New York.  They now have planes with Wi-Fi right on board....HOW COOL IS THAT???  My fantastic, wonderful, too-good-to-be-true husband took me to New York so I could see what she looks like all dressed up for Christmas.  He needed to visit a property for business and took me along for the ride.  It was truly a magical sight.  We arrived Thursday afternoon and after depositing the bags at the hotel, we headed off to Rockefeller Center to see the tree.  It was gorgeous!  I don't have photos of it, (they are on G's phone, I'll try to post those later).  We watched the skaters, went in a GIANT Lego store, saw where the Today Show is broadcast and then headed off to a wonderful Italian meal at Il Vagabondo.  All I have to say is..... Yum!  I had a chicken dish in a white wine butter sauce with sautéed spinach and G had Osso Bucco.  It is the tiniest little restaurant with a Bocce Ball dirt court right down the middle of the place.  The crowning glory of the meal was the Bocce Ball desert!  O.M.G.  Chocolate and vanilla gelato around a cherry and nuts, formed into a ball and then the whole thing dipped in dark chocolate.  I want another one right now!  If you are in New York, I would highly recommend checking this little place out.

The next morning it was off to the subway so we could go see Wall Street.  Riding the subway is surprisingly easy and the people watching is fantastic! It was really, really cold!  I mean really cold!  We walked down to the NY Stock Exchange and G. took some awesome pictures.  (By the way, all of the pics in this post were taken by G.) 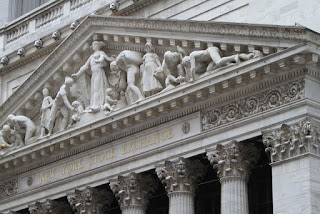 Next stop was Battery Park and after that we debated whether or not to ride the ferry out to see The Statue of Liberty.  We finally decided to wait since it was so bitterly cold and the tickets to go inside her were sold out.  Next trip....
This sculpture was in Battery Park.  It used to be at the World Trade Center and was damaged in the explosion.  It's been moved to the park and in front of the statue is an "eternal flame" as a tribute to all who lost their lives that day.  They moved the statue and lit the flame on the one year anniversary of the attack.  It's really hard to believe that it has been ten years since 9/11. 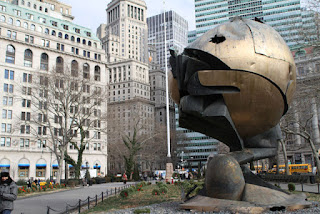 We went by to see "Ground Zero" and it's a buzz of activity these days.  There were some pretty cool drawings of what they plan to do.  G made the comment that it felt to him as if they were saying, "we will never forget what happened here, but it's time to stop being sad and show that we are moving on to new and exciting things".   He had been before, not long after it happened and told me it was a somber and eerie sight.  I had been to the city one other time and the towers were still there.  I could not help but notice the huge amount of empty space in the skyline since the last time I was there.  It was quite odd.
Well, there is much more to tell.  But lest I bore you with too long a post, I'll follow in a day or so with more of the adventure.  I SO enjoyed myself and NY in the winter is amazing.  But, I have to say it will be very good to be back home and to be in my own bed tonight.  And to see and hug Rex the Wonderdog and Max the kitty!
Posted by Tapestry Tree at 7:01 PM 3 comments: Links to this post

I sat down at my computer several times over the last few days to write a new blog post and every time, I came up blank on what to say.  It's kind of like when you have been exercising consistently and then you stop....and can't find it in you to get started again.  That happened to me with my blogging.  I was cooking along fairly consistently and then I missed about 10 days and then I couldn't get started again.  I just felt like I had nothing to say.  Two weeks ago, I woke up with vertigo and had to spend three days in bed.  The vertigo is gone, but I still am not feeling 100%.  Between that and trying to get ready for the holidays, I have had little time at my sewing machine and you have heard me whine about that!  I am almost ready for Christmas (a bit more shopping to do and probably a marathon wrapping day).  The house is decorated (as much as it's going to be this year) and it's been relatively cold here this week so I'm finally in the Holiday Spirit.  And I finally felt like I had something to write about. 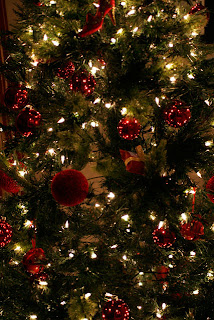 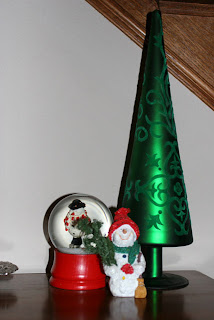 The officers of DMQG had a little get together last weekend and we all brought one handmade gift.  The challenge was to try and devote an hour or less to this creation.  I think I went a little over, but I sure had fun making this little mug rug, or potholder, or mini quilt.  I guess it could be used for just about anything.  I neglected to photograph the finished product, but here's a shot of it in progress.  I stipple quilted it and bound it in green.  We had a really great time and I ended up with the cutest tomato pincushion made by Lisa. 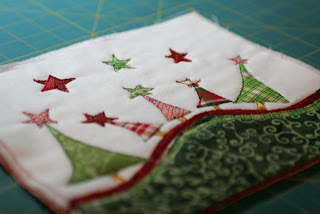 And I got my Winter Wonderland Quilt back from The Sometimes Crafter!  She did an amazing job and I took it to the DMQG meeting to show it off.  It's hanging in my house right now!  So cute.  I am so happy with the results on this quilt.  It was a TON of work, but loads of fun. 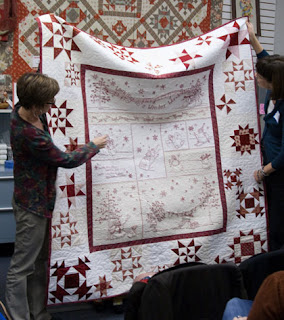 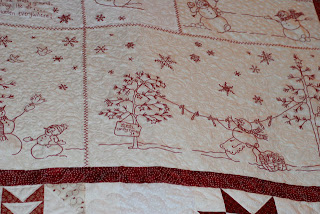 I am really happy that I sent this one out to be quilted.  It's fairly large to quilt on my Bernina and Christina did such a creative job with the quilting.  I'm getting more confident in my free motion quilting, but I could never have done this good a job.  I'll post more closeups on my Flickr page once I take some more shots.  I need to take it outside and get some really good shots with decent light so you can see the awesome quilting.

Off to wrap some gifts so I can have something under the tree.....
Posted by Tapestry Tree at 9:09 PM 5 comments: Links to this post

Tapestry Tree
I have worked with fabric since I was twelve years old, and I love working with my hands to create things. I like my art to be functional. And sometimes I have a hard time deciding which craft to work on. Come join me on my journey of cloth and thread as I weave my way through the fabric of my life.

Get this widget at roytanck.com

I Took the Process Pledge